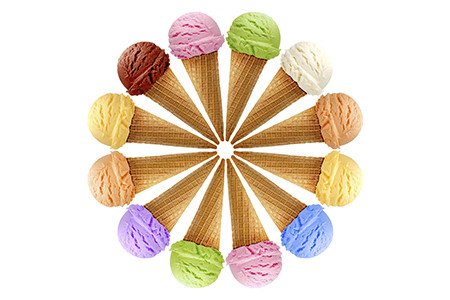 All over the world, people eat ice cream. With different cultures, though, different flavors have become popular, and even standard. Forget about vanilla and chocolate, and think cotton candy and Nutella. There are fruits and even some vegetables that have been used to make desserts for centuries, and some that have only been known to those in the region are making their rounds on earth, raising awareness of more and more food options.

Pandan is a fruit that grows primarily in Indonesia, but can be easily gotten in other parts of South Asia. The flavor is usually described as being a cross between coconut and a variety of citrus fruits. Pandan cake is more popular than pandan ice cream, but pandan ice cream is gaining popularity.

Jackfruit is a miracle fruit. Jackfruit can be cooked and shredded, and used in place of chicken or pork as a meat substitute in vegan recipes, or eaten raw with its coconut-mango flavor and dry peach-like texture. Jackfruit ice cream has been widely available in much of Asia, but is primarily available in India.

Ube is a type of purple yam that, like pandan and jackfruit, is available throughout Asia. Ube is grown primarily in the Philippines, and is made into ice cream, cake, pancakes, cookies, cupcakes, and custard. Ube itself is lightly sweet and starchy, and becoming more popular every year.

Lychee grows in bunches on trees in China, but also certain countries in Africa. The edible fruit is encased in a thin red shell that is easily peeled off to reveal a peach, very sweet and slightly tart fruit. Lychee is popular in China as a flavor of soft serve, but also in the United States as a topping for frozen yogurt.

Longnan is related to lychee, almost the way that apples and pears are related, and also originates in China. Longnan has a thin brown shell on top of a round white ball of slightly sweet fruit. Longnan is blended into smoothies and used to top ice cream as well as an ice cream flavor. Longnan’s subtle flavor makes ice cream with the flavor a great addition to any dessert.

Durian is a large, spiked fruit that grows in China and Taiwan. Durian is one of the few fruits and vegetables on the list that actually has a negative reputation: the incredibly pungent smell of the fruit has caused it to be banned from being consumed in certain public places. Outsiders are split as to whether or not the even actually tastes good, as the flavor is characterised as being a mix of nutty and extremely bitter. Either way, durian is available in the United States, and usually combined with mango in ice cream.

The sweet zing of pitaya fruit with its bright, playful color have been enjoyed as a sorbet for years by people in Central and South America. Pitaya, or Dragon Fruit can be, and is, enjoyed alone, ground with ice into the sorbet, or blended with Brazilian Acai berries for a nutritious and delicious treat.